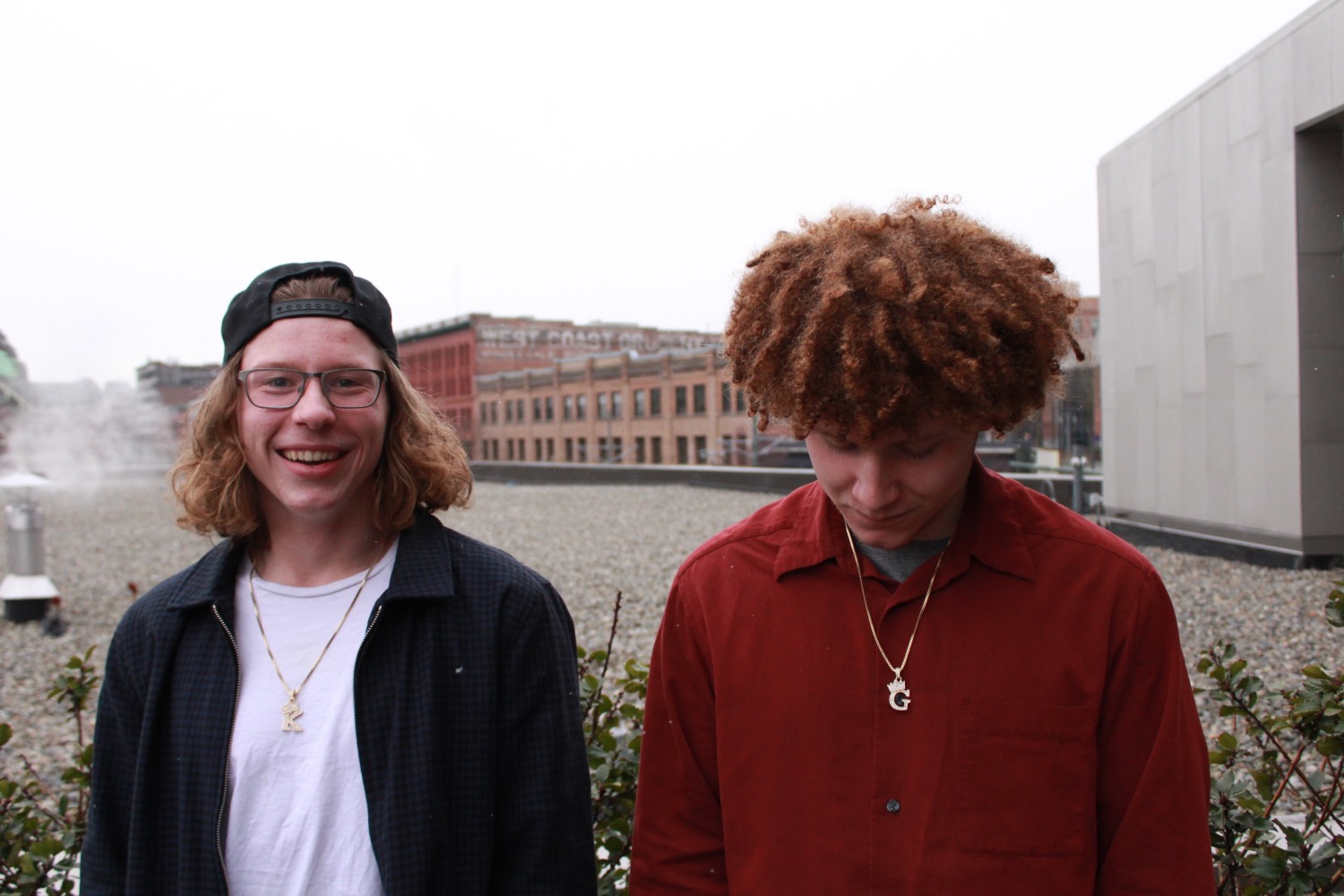 What type of genre would you label your own music?

Lemmon: You know, I think it’s definitely hip-hop, we kind of have our own flavor of originality within that, though.
Hal: Yeah. We’re rap and hip-hop for sure, but I feel like a lot of people put themselves in that box and they’re like, “Oh we’re this genre” and then people are like, “But you’re a rapper” or “You’re a Soundcloud rapper,” and I feel like that term gets thrown around a lot, but it’s like… we make music. And I think the expression of an artist shouldn’t be within one genre. People are inspired to make lots of different types of music that sounds different and that’s okay. 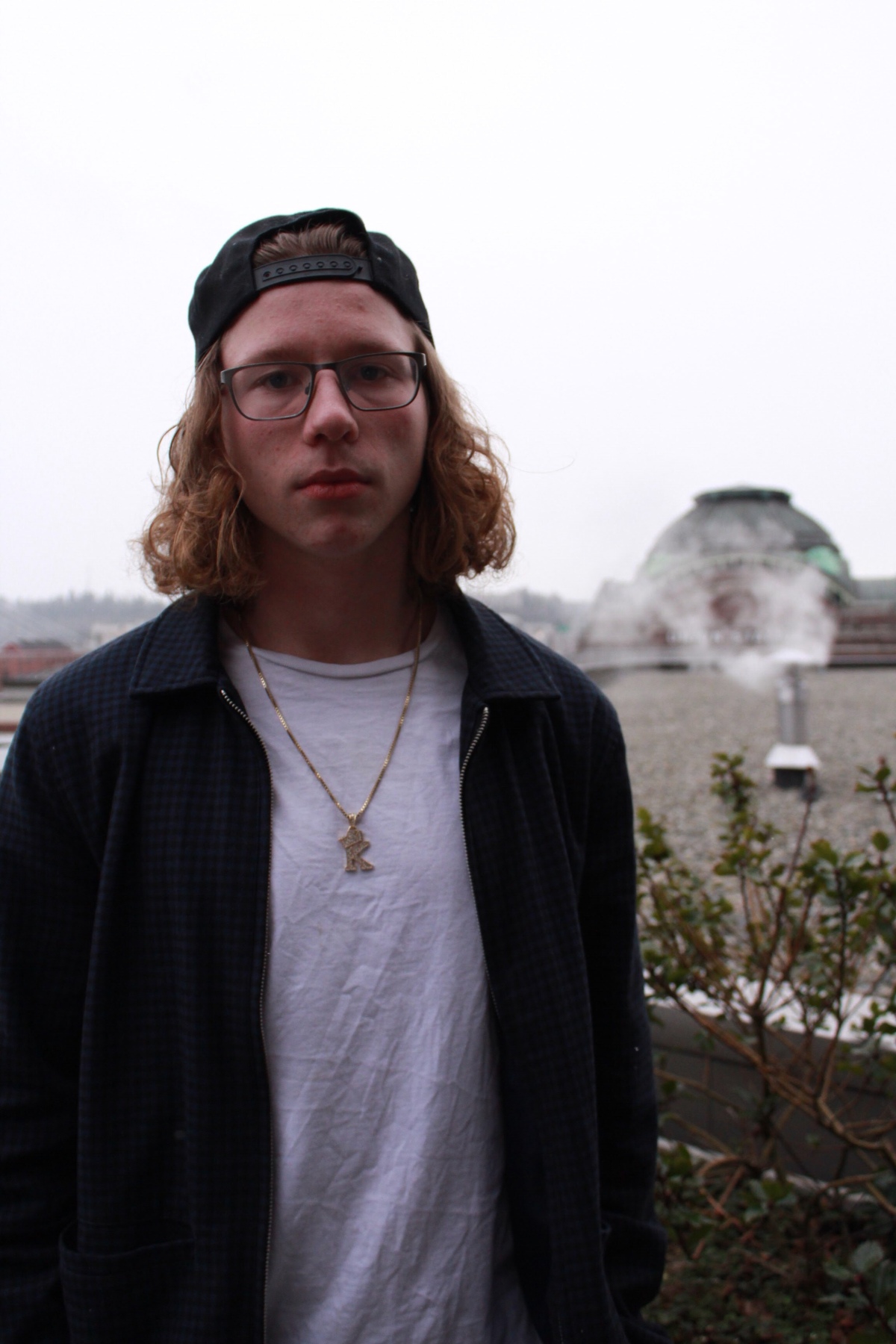 How long has KID GENIUS been around?

Lemmon: A year.
Hal: Yeah, a little over a year.
Lemmon: We started last December. [Last] January was when we started actually writing songs.

What is the origin of the name?

Lemmon: It’s on you Hal.
Hal: Liam was producing a beat and I was really vibin’ with it, and I was like, “Dude, this is genius! You’re like a kid genius!” and it just kind of got thrown out and that was going to be the name of the song. And then we were like maybe we could start something. Then later I was like, “What should our name be?” and he said, “Kid Genius” and we weren’t set on it but it stuck.
Lemmon: Seemed good.
Hal: Yeah.

What role do you both play in the group?

Hal: I’m the rapper and vocalist and Liam’s the producer, so all of the instrumentals.
Lemmon: All of the music is from me.
Hal: We’ll make songs together, but he’s the mastermind behind all of the beats and all of the songs.

Where do you draw your inspiration from?

Lemmon: Mine comes from everywhere. It’s not just one person within the hip-hop genre, but it’s people from rock and roll or jazz or even classical music. Seeing how they can find their originality, find their sound within their genre is an inspiration to me. I guess that’s what we’re trying to do with our stuff.
Hal: He’s inspired by a lot of ambient stuff, like there’s this artist named John Hopkins that he really likes. I’ve been kind of obsessed with the whole underground scene. There are artists like Suicide Boys, Wifisfuneral, and Pouya and all these underground guys that aren’t mainstream. I have kind of been obsessed with that genre for a long time, and I have just recently begun to draw a lot of inspiration from local guys like Peasant Boys and I’ll fight you. And of course, the classics like Tupac and Biggie, Outkast and Public Enemy. Our next project really focuses on the root sounds, like when you think of hip-hop, like the old school beats and relatively simple flows. I also listen to a lot of heavy metal, and Counterparts.
Lemmon: I listen to whatever he listens to. He just tells me to listen to stuff and I go. We draw stuff from everywhere. 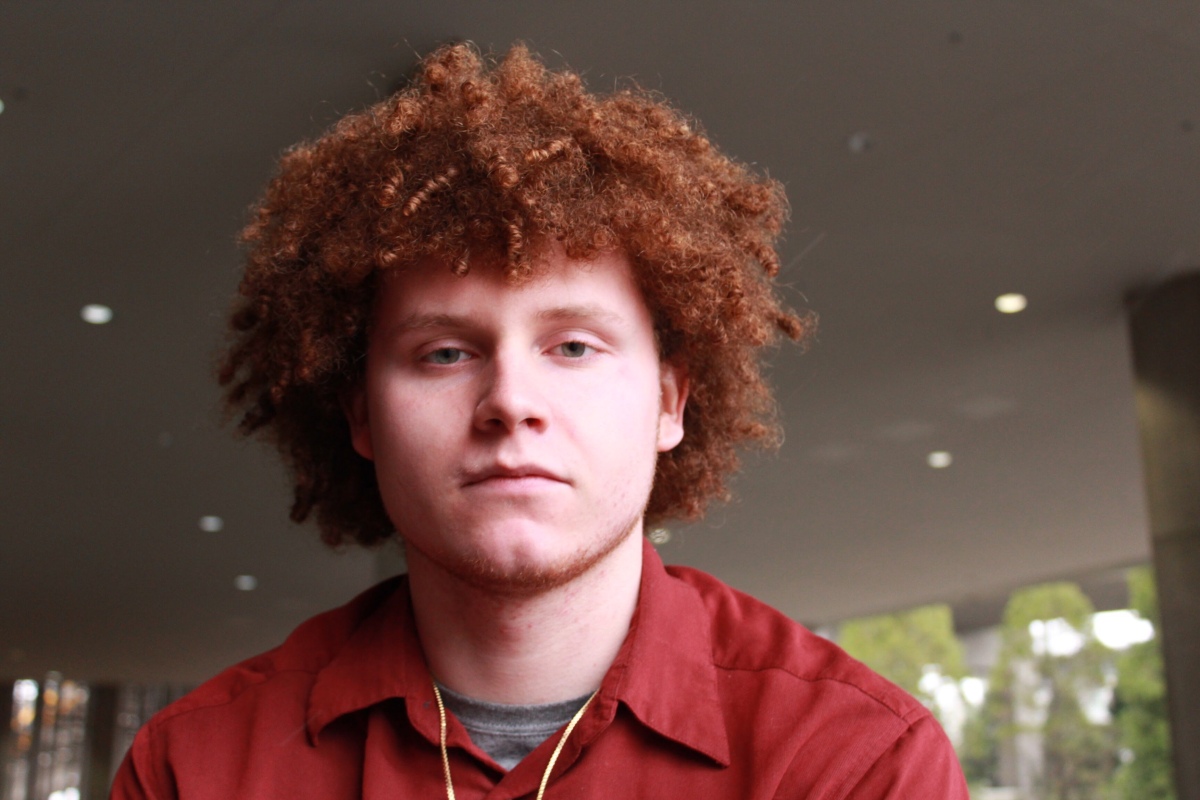 What advice do you have for people just starting their own bands?

Lemmon: I would say take action and don’t be afraid. Know how much you want. If you’re doing it just for fun, that’s great. I find that with us, we’ve had a lot of talks about how far we want to go with it, and I feel like that’s important too. Your desire, and how much you love music.
Hal: If music doesn’t make you happy, you shouldn’t do it. People make music for every single reason you can possibly think of, and every single one of those reasons is valid. Like he said, if you’re gonna do it, really do it. It’s okay to be unsure. We don’t really know what we’re doing, we just like making music and we’re still figuring it out. Just start making stuff. Just do stuff; just make stuff. Start putting out music.

What motivates you to not give up?

Lemmon: I’m addicted to making music, so there’s no way I can quit.
Hal: Liam spends hours and hours and hours on end just on his computer making beats. He’s read entire books on Ableton. There are so many artists for everyone, that really means a lot to them and that has inspired them or helped them work through a section of their life that was really hard. So even the smallest possibility that our music, or something that I create, could help somebody else through something or inspire them or change their life even, just that small chance that I could touch one person, is the coolest thing for me. The fact that we can be a source of sanction for the people.
Lemmon: It’s giving back, you know?
Hal: Couldn’t say it any better.

What is the current project/goal you are working on right now?

Lemmon. Project and goals are two very different things.
Hal: Yeah.
Lemmon: Tell them about the project.
Hal: We very recently just started talking about our next project. We just dropped an EP called “Journey” that was kind of like our first step. Our first step is kind of like identifying it like, “okay we are really gonna do this.” But our next project is …we don’t really have a name for it yet.
Lemmon: Not yet.
Hal: We’re working on something, but there’s another EP in the works.

Is it luck, or hard work that shows results?

Lemmon: It’s luck- no.
Hal: Bro, you got to have hard work.
Lemmon: Some things are just natural, but at the end of the day, if you were to take someone who is naturally good at music versus someone who works every day at it, over a period of time I don’t think the person with luck is going to win.

What art besides music, do you find especially intriguing?

Lemmon: Photography is one thing I find very intriguing. It’s really cool that we can use it with our music with our album art. I’m very strict with album art.
Hal: Image is such an important thing.
Lemmon: You gotta find an image that blends with the music. You can’t have a heavy metal song with a picture of a butter-
Hal: Butterfly.
Lemmon: Or violin or something.
Hal: Well you can make anything out of anything.

Where do you see yourself in five years?

Hal: Hopefully in Los Angeles or somewhere in California making music. I mean, that’s our dream that we want.
Lemmon: That’s the target.
Hal: Yeah it’s to go to California. I kind of fell in love with it after a couple of trips. Every time I’m there I’m like, “This is where I’m supposed to be.” So hopefully there, doing this. 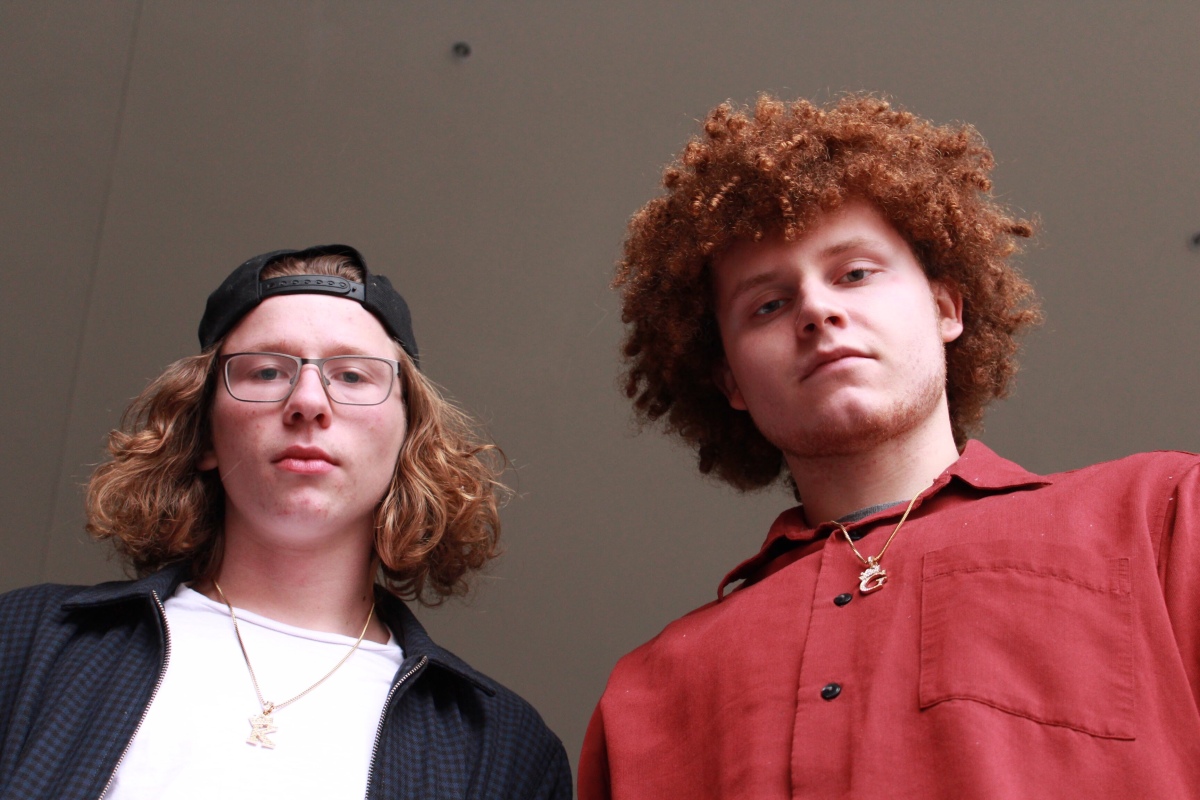 How are success and fame different?

Lemmon: I mean, you can be an electrician and be successful, but not have fame, you know? What do you think about that, Hal?
Hal: I think success is very subjective; like very subjective.
Lemmon: I agree. It’s happiness.
Hal: I think success is contentment. One person’s success may be finally making that first song or playing their first show, or releasing their first project. While another person’s success may be having six albums go double platinum and selling out every major stadium in the US. Both of those are equal and valid success, but fame isn’t necessarily success. There are people who have gotten famous over the stupidest things.
Lemmon: Yeah,
Hal: Just because you’re famous doesn’t mean you’re successful.

Why is it important to recognize teen art?

Lemmon: They’re the future; teens are the future.
Hal: Everyone’s voice is valid. A lot of people say like, “You’re just a kid. You don’t know what you’re doing. You don’t know where you want to go you. You don’t know what you want to do.” And a lot of kids are like, “Yes I do.” And they don’t know how to express that. A lot of these kids are so creative and so different and they challenge certain ideas and they bring out these ideas and they bring out certain things and it’s like, listen to these kids! They have very important things to say. Every voice is valid.
Lemmon: It’s valid.
Hal: Its completely valid, and it’s a different perspective. And most of it is without an ego. I say that tentatively because there are a lot of kids that have big egos. But I think adults have the biggest egos. They’re like, “We know everything. We’re gonna teach you.” And it’s like, that’s true-they can teach you a lot, but like-
Lemmon: No.
Hal: Yeah.

How can Tacoma improve in highlighting work from teens?

Lemmon: Probably open up more places to play than just Realart.
Hal: There’s Louie G’s in Fife and there’s Realart. I feel like more places for specifically youth art to showcase, or more events for kids to meet other teen artists to network. I am very, very fortunate to be at SOTA with other art kids who make music. In any room, there’s anyone who can do anything, and you could potentially have all the musicians to make an album and all the artists to make artwork and all the people who know how to push that album. More of the local community, I guess.

Who is responsible for giving Teens a platform?

Hal: I think teens are going to have more initiative because adults are going to be more hesitant to invest in that, even though it makes more sense to invest in the future than other things. I think teens, and just kids, will have the better mindset for that, but in reality, adults have the resources and the positions to make these things happen.

Go check out Lemmon @Lemmonproductions and Hal @Halwarren_
And follow the two at @Kidgenius_
Also take a minute to listen to their music!